“It’s like any game, you win or you lose.”
-Jimmy Bond offers a useless description of how to play baccarat.

Ian Fleming’s first James Bond novel, Casino Royale, was published in April of 1953. A year and a half later, CBS televison’s Climax Mystery Theater broadcast a live, one-hour adaptation of the novel. It was the first time James Bond was ever seen in action on a screen of any size. Of course, there are several differences between the novel and the TV special, the most glaring of which is the decision to make James Bond an American, known to (now British) fellow secret agent (Clarence) Leiter as “Card Sense” Jimmy Bond. Yikes. What follows is my own response to the “Casino Royale” television episode.

I believe I first encountered this episode when I saw a VHS copy of it on the shelf of the video section in the local Lewis Drug Store in my home town. It was probably around 1995 or 1996. I rented it and watched it and really have had no lasting recollection of it beyond the presence of Peter Lorre and Bond hiding a check behind the number plate of his hotel room door. I decided to revisit the episode. Directed by William H. Brown, Jr., the program stars Barry Nelson as Bond, Peter Lorre as Le Chiffre, Linda Christian as Valerie Mathis and Michael Pate as Clarence Leiter (oddly called “Letter” in the closing credits). I must say that the episode still isn’t particularly memorable, but I’ll write a bit about it anyway.

Starring Peter Lorre as Himself and Linda Christian as someone forgettable

The episode opens by looking into the lens of a video camera. The effect is oddly similar to the gun barrel openings that would become a staple of the official James Bond series. Climax host William Lundigan gives an intro and then we see an attempt on James Bond’s life. It’s an awkwardly staged action sequence, but it’s notable because the gun and the (intended) victim are both seen on screen at the same time, though the gun is clearly pointing nowhere near its target. It’s the only real action we’ll get until the end, which is also fairly awkward.

I don’t want to go into too much plot summary, but the gist is that a Soviet agent named Le Chiffre has gambled away a bunch of Soviet funds and is now at Casino Royale to win them back. “Card Sense” Jimmy Bond (an agent of Combined Intelligence) is there to beat Le Chiffre. If Bond wins, Leiter will make sure Le Chiffre’s loss will be published in papers so the Soviets look foolish. As a bonus, the Soviets will probably get rid of Le Chiffre too. Valerie Mathis is an old flame of Bond’s who is now with Le Chiffre, though in the end it turns out she’s with French intelligence (for some reason) and is really against Le Chiffre too. In the end, Bond wins and hides the check behind the number plate, Le Chiffre tortures Bond to try to get the money, Valerie helps to free Bond and Le Chiffre is shot (off camera) and, presumably arrested.

One great part about the novel (the only Bond novel I’ve read) is the detailed explanation of how the game baccarat works. It’s interesting and informative. I think this TV episode tries to do the same thing by having Bond explain baccarat to Leiter, but it falls flat. Even worse, the greater part of Act II (this special is divided into three acts) is a hand-by-hand game of baccarat. It’s incredibly boring. There’s no music and, despite Lorre’s flamboyant gestures, the scene just drags interminably. The tension that should accompany a high-stakes card game, particularly one in which Bond loses everything, only to be given a loan by Leiter, is entirely absent, which is a shame.

The acting is decent, though nobody really stands out, with the exception of Lorre, but mostly because of his unique look. Still, he would’ve made a decent Bond villain in the official film series. The writing is very simplistic, perhaps to make it easier for the actors to remember their lines, or make stuff up when they forgot. There are a couple of notably odd lines involving a weapon belonging to one of Le Chiffre’s henchmen, a gun that is in the shape of a cane. The henchman puts the barrel of the weapon against Bond’s lower back and says: “My cane is in your back, but it is a gun, not a cane.” It just sounds silly. Leiter does his best to top that moments later when he uses the same weapon to threaten one of Le Chiffre’s other henchmen right in the middle of the casino floor. He demands to know where Valerie is, stating “this gun is completely silent I suppose.” It’s a little ridiculous. Bond does get one good line in toward the end: “You won’t get anything out of me. Pain and killing’s a part of my job.” 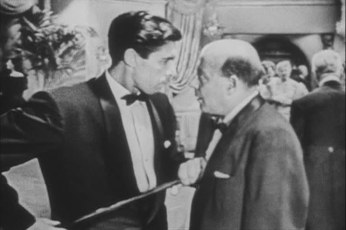 I’m only guessing this is silent. It’s not actually mine.
– Clarence Leiter “inconspicuously” threatens a guy

For a live broadcast, the episode is technically sound for the most part. I counted only one noticeable flubbed line (Lorre), a couple of late cues (particularly when dealing with a telephone) and some instances of poor sound recording. Otherwise, the camera placement seems to be fairly complex, considering the movement from set to set. There are a couple of decent shot compositions as well, which are all the more notable since this was a live broadcast. There is almost no music in the episode, save for the radio in Bond’s hotel room and the swelling music to begin and end each act. As stated above, this lack of music hurt the episode, however I don’t know how prevalent a score was for 1950’s TV, so this might just have been status quo. Notably, “original music” is credited to Jerry Goldsmith, one of his earliest credits.

In the end, I can’t say I’d recommend seeing Casino Royale unless you have a real interest in Bond’s first screen appearance or you’re a Bond completist. Far from being the James Bond we know now, Nelson’s Bond isn’t really too close to the Bond of Fleming’s novel either, though the episode gets to some of the same plot points at least. Watch it to say you’ve watched it, or just don’t watch it at all, you’ll probably feel the same either way.

This version of “Casino Royale” is available on youtube and on the 2002 DVD release of the 1967 spoof Casino Royale.