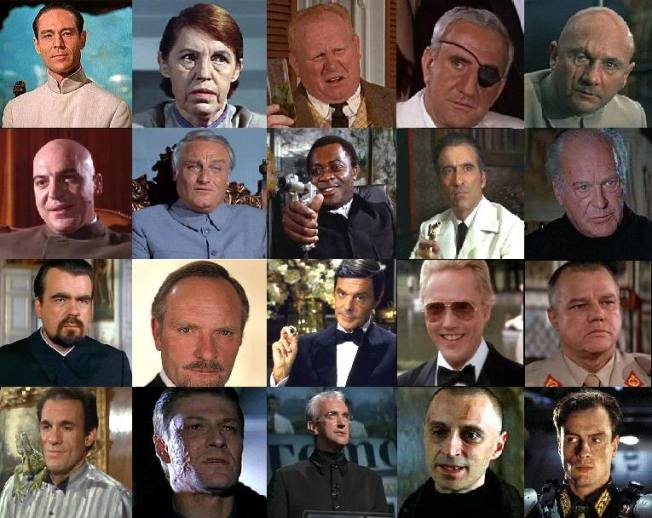 I’ve still only seen Skyfall one time, but I’ve been thinking about it quite a bit as more of my friends have been trekking to theaters to watch the latest Bond extravaganza. A lot of things I’ve heard and read about the film praise Javier Bardem’s Silva as one of the best (or perhaps, the best) villains in the entire series. Though I was cautious in my first Skyfall post, choosing to say vaguely that the film was probably near the top half of the series (until I’ve seen it again at least), I been thinking about Silva and exactly where he ranks in the James Bond rogues gallery.

While eventually I might like to turn this into an in-depth film-by-film look at all Bond villains, I won’t do that here. I do think that it is worthwhile to at least briefly consider many of the main baddies and find out specifically what doesn’t work, what does work and why Silva is getting so much praise. Please keep in mind that this isn’t a comment on the quality of the films, or even the performances, it’s just my way of beginning an analysis what might make a cool/good James Bond villain. Many villains embody some or all of the few characteristics I list below, but I wanted to try to separate them a bit, not only because it’s fun to make lists, but also so I’ll have a bit more to write (and you’d have more to read).

What Doesn’t Work So Well

They may be creepy or charismatic, but they’re just not quite imposing enough to be Bond’s main antagonist. Granted, Blofeld is a HUGE part of the Connery films, but Pleasence just seems so slight in YOLT, despite his creepiness. I feel like the only thing the filmmakers could decide on for Stromberg was “menacing,” otherwise he seems like a clumsy retread of Pleasence’s Blofeld mixed with Dr. No (webbed hands, really?). Price chewed the scenery appropriately and really went after it with his one-handed computer keyboard, but he’s not exactly imposing. These three guys were each helped with the physical side by tough henchmen (Hans, Jaws and Stamper, respectively) who were more a match for Bond, which brings me to…

-Villains who won’t get their hands dirty: The above, plus Hugo Drax (Michael Lonsdale in Moonraker), Kamal Khan (Louis Jourdan in Octopussy), and Georgi Koskov (Jeroen Krabbé in The Living Daylights).

These guys have henchmen too, though perhaps they could hold their own if they weren’t so lazy or cowardly. Koskov is fun at times, but he’s never really a threat. Drax has some great lines, but Lonsdale seems to be sleeping through some of the film (though he’s better than Lois Chiles in Moonraker, who appears to be clinically dead). Jourdan (pictured above, as Kahn) was also in his early 60s when Octopussy came out. That makes him one of the older villains, a trait which is offset by the fact that he was squaring off against Roger Moore, who was in his mid-80s at the time.

Worth a mention: Emilio Largo (Adolfo Celi in Thunderball) as well as the Telly Savalas and Charles Gray versions of Blofeld (On Her Majesty’s Secret Service and Diamonds Are Forever), and perhaps Aris Kristatos (Julian Glover in For Your Eyes Only) kind of feel like they should fit into the first category. They’re not all exactly old or weak, but they just don’t seem ready for the fight. They each partake in some of the action, however, which keeps them off the lists proper.

What Does Work Well

-A villain who is in charge: Auric Goldfinger (Gert Fröbe in Goldfinger),  Max Zorin (Christopher Walken in A View to a Kill), Franz Sanchez (Robert Davi in Licence to Kill), Elektra King (Sophie Marceau in The World is Not Enough).

Goldfinger is the classic villain with classic lines from arguably the most popular Bond film of all. Zorin is appropriately crazy and is, of course, Christopher Walken. Sanchez is ruthless and violent (here comes the PG-13 rating!) and he makes Bond’s hunt personal. King is just manipulative and seems to take pleasure in her villainy. Plus, it doesn’t hurt that Marceau is quite attractive. Bond doesn’t technically go one-on-one with all four of these villains, but they are the masterminds behind their grand plans, they are (mostly) charismatic, and they’ll all pick up a gun or a knife if necessary.

[NOTE: Elektra King is essentially on equal footing with Renard (Robert Carlyle), but I think she’s strong enough on her own to fit in this category. I’m hesitant to say the same for Renard, but, considering his co-lead villain status, and his absence in the early goings of that film, I’ll include him in the next category]

-A villain who is an equal to Bond: Red Grant (Robert Shaw in From Russia With Love), Francisco Scaramanga (Christopher Lee in The Man with the Golden Gun), Alec Trevelyan (Sean Bean in Goldeneye), Renard (The World is Not Enough).

It’s this category that I think works the best. Grant and Trevelyan are spies; Renard is ex-KGB; Scaramanga is an assassin. They are physical equals to Bond and they can turn a phrase as well as they can throw a punch. Also, I’d put two of these four films at/near the top of my list for the best of the series.

A lot of the guys in charge are often the older men from the first section, and, as mentioned, a lot of the guys who are equal to Bond are the henchman. The physicality that henchmen bring to the films (a trait that the main villain sometimes lacks) helps to balance a film out. Imagine Stromberg without Jaws (Richard Kiel), Carver without Stamper (Gotz Otto), or even, to a degree, Goldfinger without Oddjob (Harold Sakata). Those films wouldn’t be nearly as interesting.

Leftovers: Dr. No (Joseph Wiseman) is a prototypical Bond villain, but he has such little screen time that it’s hard to call him much of anything. Kananga (Yaphet Kotto in Live and Let Die) holds his own and actually fights bond, but he’s got more henchmen than any other villain in the series (Whisper, Tee-Hee, Baron Samedi, Rosie Carver). Orlov (Steven Berkoff in Octopussy) and Whitaker (Joe Don Baker in The Living Daylights) seem sort of secondary, though both are a bit crazy. Le Chiffre (Mads Mikkelsen in Casino Royale) is imposing, but is also under the thumb of Mr. White (and he’s a careless gambler). Dominic Greene (Mathieu Amalric in Quantum of Solace) is slimy, but forgettable. The less said about Die Another Day, the better, though the argument could be made that the villains Graves and Frost (Toby Stephens and Rosamund Pike) fall into the “equals” category.

If you can’t already tell from the above, he fits into the categories that work. In thinking about him, I honestly believe that the writers of Skyfall went back to the previous films in the series to find out who the best villains are and why they work so well, then they modeled Silva after them, at least in part. This holds with my observation that Skyfall is also more of a return to formula for the Bond series (though it still fits nicely with Casino Royale and Quantum of Solace, despite the lack of Felix Leiter).

Like my group of villains that “work,” Silva is in charge of his outfit of nameless thugs, answering to nobody but himself, but he also gets in on the action throughout the film. Sized up against Bond, Silva is undoubtedly one of 007’s equals. I’d say he is most closely related to Trevelyan. He’s former MI-6, he wants revenge, he had his face messed up. He also owns his own island like Scaramanga (though sadly, we didn’t get to see as much of it as I would have liked). Perhaps the main difference between Silva and the other three is that he never gets a one-on-one showdown with Bond, something that I think is a missed opportunity for Skyfall. However, to the film’s credit, this omission is one you might not even notice. Sure, they have a memorable introductory scene, and they have the shooting match (shades of Goldfinger‘s golf game, Moonraker‘s shooting party, or any number of casino games throughout the series), but they never really get a chance to beat the tar out of each other (like with Grant, Trevelyan or Renard), or even just face off (like Scaramanga). I noted in my previous post how strange it is that Silva doesn’t even show up until almost halfway through the movie. It also takes a little while for Renard to appear in TWINE and for Trevelyan to be officially revealed as the main villain in Goldeneye, so perhaps there’s even some precedent for that, and it isn’t so strange after all.

Something that sets Silva apart from most other Bond villains is the fact that he’s played by a reasonably well-known actor, Academy Award winner Javier Bardem. The degree of fame achieved by actors playing villains in Bond films tend to vary, quality of performance aside. I don’t think it matters a lot, but it certainly doesn’t hurt, especially in Bardem’s case. Of course, having an Academy Award does not a great Bond character make (ahem, Halle Berry), but still, anyone who has seen No Country for Old Men knows what Bardem can do. Plus, the guy has been nominated twice in the lead category as well (Before Night Falls in 2000 and Biutiful in 2010). He’s got pedigree. Notably, Walken was an Oscar winner prior to starring in a Bond film as well.

Whether they went back to the well of previous Bond films or not, the writers certainly took at least a little look at another iconic villain in recent film history, the Joker, as played by Heath Ledger in The Dark Knight. There are a lot of connections between the two, including the aforementioned “William Tell” shooting contest with Bond (a deadly little game), the army of nameless goons, seemingly unlimited resources, dressing up like a cop, and perhaps most notably, the elaborate escape from MI-6. A friend of mine said that Silva is a combination of the Joker and Hannibal Lecter, which I think is a pretty interesting description. Hopkins and Ledger both won Oscars for those roles, but whether Bardem is ready to add an(other) Oscar to his collection, we’ll see.

In conclusion, if there is a conclusion, have I decided whether Silva is the best Bond villain ever? I’m not ready to say that. However, I think he shares many traits with the best and most memorable Bond villains of the past, plus, he’s in one of the better films in the series (I feel I can fairly confidently say), and that probably puts him near the top of the list.

2 thoughts on “Building a Bond Villain: Where Does Silva Rank?”