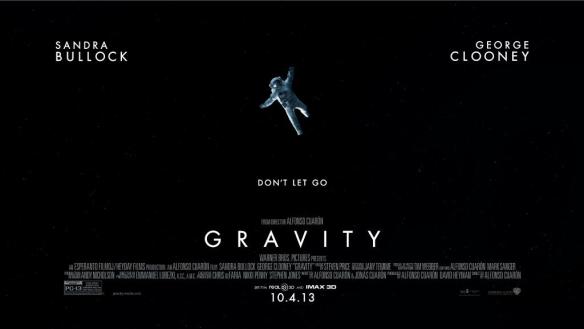 Let me begin by saying, if you haven’t seen Gravity, you should just go out and see it. If you have the opportunity to see it in IMAX 3-D, take it. If not, see it on the biggest screen you can. THEN come back and read this.

I thought about subtitling this post “Murphy’s Law in Space.” That’s really kind of what this movie is. The hits keep coming for Ryan Stone (Sandra Bullock). She gets untethered from her shuttle only to be rescued by mission commander Matt Kowalski (George Clooney) only to almost run out of oxygen, only to get to the damaged International Space Station only to be forced to let Matt drift away to die, only to barely make it inside the ISS, only to have a fire break out, only to make it to the “escape pod,” only to have its parachute get stuck, only to be able to remove the parachute, only to lose her power wrench, only to get it back, only to see the debris cloud come around again, only to get the escape pod free, only to find it has no fuel, only to get a transmission on the radio, only to have it be some non-English speaking guy on Earth, etc, etc, etc…. It’s really pretty silly.

But my goodness is it gorgeous.

The computer generated imagery (CGI) is stunning and seamless. Director Alfonso Cuarón’s love for the long take is taken even further here. The opening “shot” goes on for what seems like 25+ minutes (I didn’t time it, because I was so enthralled). Of course, the fact that so much of it was CGI and probably sewn-together takes diminishes it a little bit, especially compared to the more practical and also-stunning Children of Men. Still, they were never actually going to film in space, right? So there’s no way I can fault them for visual cheats. It’s all just beautiful.

Also notable, the sound in the film. Yes, there’s a score which amps up some of the sequences, but in the initial debris “attack,” as far as I can remember anyway, almost all of the diegetic sound came over the astronauts’ radio channels. We saw the shuttle being pulverized by satellite debris, but we didn’t hear it. I wonder if that’s actually more frightening. This degree of “realism” not found in many other space movies adds to the claustrophobia and the “you are there” nature of the film.

If you can’t imagine what it would be like to be free-floating “far above the world” Gravity forces you to. Every time Ryan let go of a handhold or missed grabbing a lifeline, the fear of being untethered in space became real for me. It’s a feeling of terror that is different from anything a horror/slasher film can provide. There are plenty of other recent survival films (The Grey, 127 Hours, Life of Pi) but the best situational comparison I can think of is to 2003’s Open Water, only with a higher budget, better actors and an amazing director.

Sandra Bullock holds her own against the amazing setting for the length of the film. I’m not entirely sold on the backstory they force on us through Ryan’s conversation with Matt (stop talking, concentrate on breathing more slowly!), but it could be argued that the film works better if we have more of reason to relate to this character and care about her survival. I think that the film doesn’t need these characters to be fleshed out. It could get by on the survival story alone, with an assist from the star-power of its leads. Also, mileage may vary on a late Deus-Clooney-ex-machina scene (and the WALL-E fire extinguisher). That said, for a movie that’s really a “1.5 hander,” the sometimes-clunky character moments don’t severely diminish everything else. Plus, they gives Bullock a chance to emote and cry zero-g tears.

I’m not really sure how to classify Gravity as far as just how great it is. It’s almost a high-concept gimmick film. It is light on cast, but heavy on (stunning) visuals. The world of the film, though minimalist (hey, it’s space), is still immersive and the craft on display is incomparable. I’m okay with Cuarón making me wait 7 years (since Children of Men) for this. Also, someone get Emmanuel Lubezki an Oscar, even if there’s more CGI in this than in the last few films he’s shot.

I could say more, or try to refine my thoughts a bit, but maybe I’ll just go see Gravity again, before it leaves the IMAX theater. You should too.