On January 20th, FX’s Justified began its sixth and final season. Based on several Elmore Leonard works, Justified follows Raylan Givens (Timothy Olyphant), a US Marshal who is “exiled” to his hometown of Harlan, Kentucky. Raylan frequently finds himself in conflict with erstwhile mining buddy, now criminal mastermind, Boyd Crowder (Walton Goggins), as the two attempt to coexist in a world that seems a little too small for both of them. Justified highlights the local culture and explores numerous themes, such as family, religion, history and the thin line that divides the good guys from the bad.

Join Patches (of Nothing But The Rain) and me in the coming months as we honor this criminally underrated drama with a series of “RayActions” to each of Justified’s Season 6 episodes. These posts will not be particularly formal, but will give us the chance to make some observations and reflect on each episode, likely culminating in a full Season 6 Dead Season Discussion after the finale.

This week’s RayAction covers Justified’s Season 6 premiere, “Fate’s Right Hand.” It contains SPOILERS for the entire series of Justified. Fire in the Hole!

Patches
Justified is back. And I mean that both literally and figuratively.

First, the literal part. I have missed this show more than any other show on television. I watch Homeland, Always Sunny, and Brooklyn Nine-Nine, Sherlock, and Game of Thrones. Most of those shows, I can watch when it is convenient. I have no compulsion to watch them NOW. The exception is Game of Thrones, which can sometime be – “oppressive” or “a chore” are too strong, but – heavy. It takes a lot of energy to watch Game of Thrones. It’s epic, meaningful, constantly tragic, and most of the time, almost relentless in its humorlessness.

I missed Justified so much because it so effortlessly avoids either problem. It is deep and meaningful and explores important topics and themes, but it’s loaded with quirkiness, humor, and local flavor. Justified is a lot like Raylan describes bourbon to a Mexican Federale: It “tastes like a warm summer day.”

The figurative “back” is more of a comment on Justified’s fifth season. It had its moments – Canadian mobsters Dave Foley and Will Sasso, the surprisingly effective Michael Rapaport, Eric Roberts as the Ghost of Raylan Future, and the spectacular subversion of Danny Crowe’s 21 Foot Rule – but Season 5 was, all things considered, the show’s weakest season. It was as though the entirety of Season 5 existed just to position everyone for Season 6. Thankfully, “Fate’s Right Hand” shows Justified back at it’s swaggering, confident self, pointing in any number of equally awesome directions they could go to end the series.

Because “Fate’s Right Hand” was a lot more about setting the stage and hinting at possibilities, there’s little specific to talk about other than the inevitable death of Dewey Crowe. Let’s not pretend it wasn’t a minor miracle Dewey survived into S6, but it still carried weight.

First, there’s the clear Of Mice and Men reference (wait, wrong one), which is always tragic to anyone who has read the book. 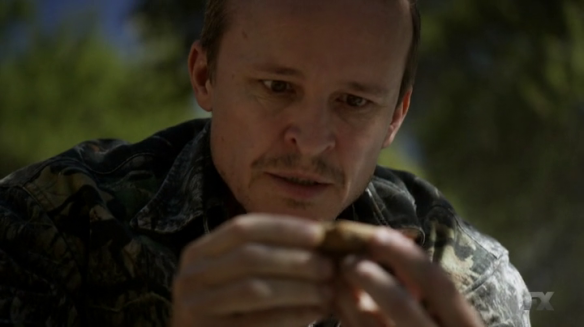 Most importantly, though, Dewey was as close to an innocent as Justified allowed. He’s done some awful things, but is too stupid to comprehend them. He’s just doing what he’s told because the people telling him to do those things are also telling him they are his friends. His death, at Boyd’s hand, is a clear indication that Boyd no longer has any use for innocence or nostalgia. He’s come to the understanding that ruthlessness is the only thing that will get him out of Harlan alive.

Welcome back, Justified. I’ve missed you.

Jeff
What does the future have in store?

For Raylan, it’s wrapping up the case around Boyd so he can move down to Florida to be with Winona and his daughter.

For Boyd, it’s doing what he must–robbing banks for Mary Steenburgen–so he can get enough money to live comfortably somewhere far away from Kentucky.

Boyd and Raylan are, and always will be, two sides of a coin, inseparably connected, but in irreconcilable opposition. This season of Justified is going to tell us how the coin lands. However, heads or tails might not be that simple. They may have plans for the future, but they’re both looking past one another. Their stories, if not their lives, end with a final confrontation. They don’t know it, but we sure do.

Rest in peace, Dewey Crowe. You might have thought you had a dream for the future, but all you wanted was to go back, to relive the glory days. You can’t live your life looking backward, whether out of fear or nostalgia. Boyd showed you men with a vision for the future. He told you to look into their eyes and see those dreams for yourself. But those men are dead. So are you. You were damned, failing to look back while staring into the past. It’s all coming to an end. 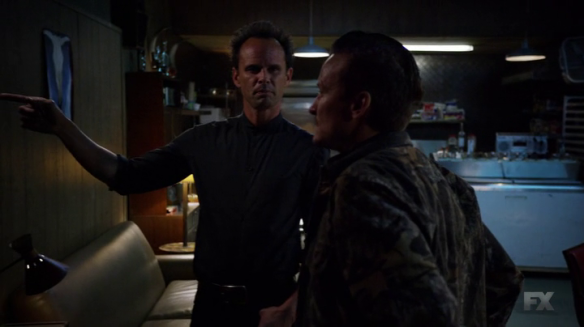 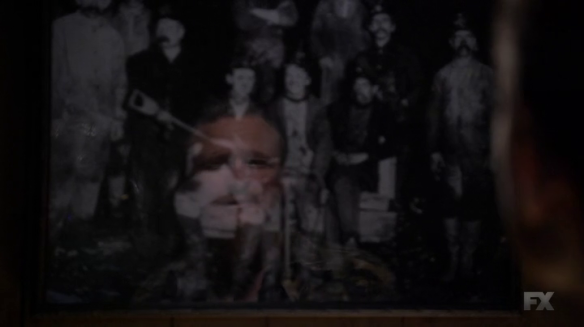 Hey! It’s RayAction time! Got a little metaphorical up there, but I beg your indulgence as I am at times taken by my ambitions poetic, especially after watching this show! I love the writing on Justified like I love the writing on Deadwood. I love the fully fleshed out, populated and lived-in world of Justified like I love the world of Parks and Recreation. I don’t have a third show to round out this comparison, but I think Deadwood meets Parks is good enough for now, don’t you?

I’m really going to miss Dewey, though he got a sendoff similar to the great Jesse James, so there’s that. Maybe his death will go down easier knowing that, in one way or another, every other amazing character on this show is going away in just 12 episodes. I think that just makes it worse, especially if Justified sticks the landing.

I’m not going to take up space listing off questions raised by the premiere. We have time to get to those answers. I’ll say this: “Fate’s Right Hand” felt like a final season premiere. It’s all about Raylan, Boyd and Ava, and the future doesn’t look bright for at least two of them. Something to remember: the first season began with Raylan shooting Boyd, but it ended with them teaming up and Boyd calling Raylan his “only friend.” Sure, there has been a lot of water under the bridge since then, but for as often as Justified’s characters reference their history, it might pay for us to remember it too.

Line of the Night 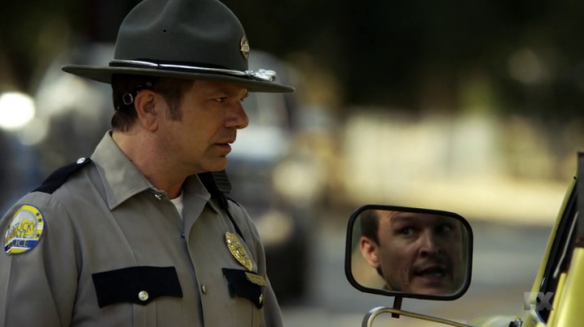 Patches: “Oh, they didn’t tell you who I am? I am Dewey goddamn Crowe, and I’m gonna keep on driving so I can save the state of Kentucky and the government of the United States of America another $300,000 for harassment, ‘nelgigence,’ and general ‘mal-fee-essence.’ So, have a nice day and kiss my ass.” –Dewey Crowe 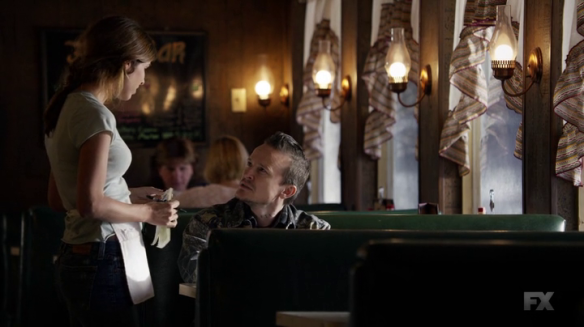 Jeff: “Any chance I could maybe jam one last bone in you?” –Dewey the romantic

Biggest Question
Patches: During Raylan and Art’s little chat, Raylan brings up the possibility of taking on Boyd one-on-one. Art reminds Raylan that “sometimes, the bullet find you.” Foreshadowing?
Jeff: Does Boyd trust Ava? If not, how much does he know, and how much is he willing to let slide because of what she means to him and how guilty he feels about last season?

Jeff: Is Garret Dillahunt a lone wolf, or is he working for someone (and is it someone we know)?
Patches: I believe we are all familiar with George Hearst. But seriously, he’s a hitman for Dave Foley’s Canadian Gangster, out to avenge anyone connected to his partner’s death.

Patches: Can you list one thing more dangerous to American liberty than the banking system?
Jeff: As a staunch supporter of Henry Clay, proponent of the American System, I look favorably upon the idea of a National Bank. I fear that Mr. Crowder and associates may have robbed a state, or local bank. Of course, this is all moot due to Andrew Jackson, the FDIC and the fact that Boyd didn’t really take any money. So, sure.

Jeff: What’s the over/under on episodes until Raylan and Boyd meet up?
Patches: My money is on them never meeting up and they both live happily ever after. Or 5.5. Take your pick.