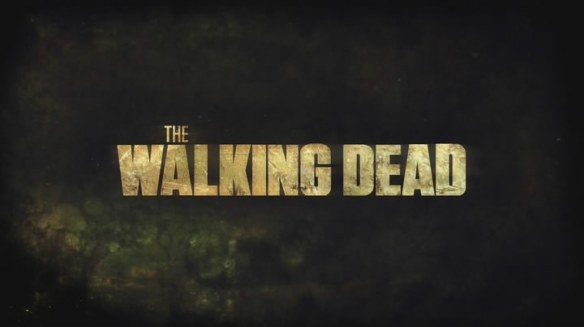 I must admit, I wasn’t the biggest fan of this episode as I was watching it. Then, while constructing this post, I realized what the writers were doing with certain parts of the story, which increased my enjoyment significantly. Whether by design, or not (I’m guessing not), this episode contains a parallel to a celebrated piece of classic literature. Not everything in the episode ties in, but I think there’s enough there, so just go with it.

We open with Merle and three guys out on the hunt. Initially it seems like they’re looking for Daryl (as the “previously on…” suggests), but it turns out they’re hunting for Michonne on the Gov’s orders. They come across a “biter gram” that Michonne has made out of walker parts, telling them to go back. I really liked the biter gram. It was weird and funny, though it seems like a lot of work to go through, stopping to leave an elaborate message for the people who are chasing you. Neil Unpronounceablelastname, one of the guys with Merle, seems a bit upset by this whole “hunting a living human” affair. He doesn’t have too much time to complain before Michonne appears, killing the other two randoms and running away, but not before getting shot by Merle who shouts “are we having fun yet?” apropos of nothing (but a love of Party Down).

“I knew there was a good reason I decided to call you Neil.” [rim shot]

Later, after convincing Neil to start growing a pair, Merle and Neil track Michonne down again. Of course, they’re all attacked by walkers. Michonne neatly slices open the abdomen of one walker, who promptly spills his guts all over her. It’s appropriately gross and hilarious. She gets away and Merle and Neil argue about whether to go back and tell the Governor that they’ve killed her (Merle’s idea) or to follow her into the “red zone” and finish her off (Neil’s idea). In the end, Merle provides the more persuasive argument, shooting Neil in the head (but not before making an attempt to pronounce his last name, a nice touch). Merle starts back to Woodbury. 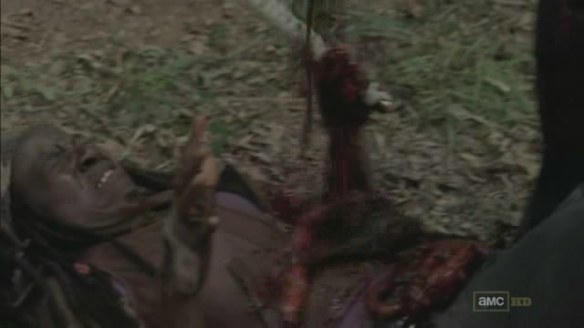 Meanwhile, at the prison, Rick is on the phone with the phantom caller from last week. It’s not Jacob Marley jangling the chains he forged in life, but a woman who claims that she and her group are in a safe place “away from them,” likely meaning the walkers. Rick pleads with her to let the gang join up with her and she says she has to check with the rest of her group. It’s a nice sincere moment as Rick clearly shows he has the gang’s best interest at heart and that he really just wants to be in a place that is far away from all of this death and (re-)killing. The woman on the phone then tells Rick that will be visited by three ghosts who will teach him that he needs to change his ways before it’s too late. Certain that this caller is not simply “an undigested bit of beef, a blot of mustard or a crumb of cheese” Rick rationally decides to go have breakfast with everyone. He walks into the room as if nothing really happened last week. They ask him about clearing the cell block and after telling them he’s killed a bunch of walkers, he leaves abruptly to await the arrival of the first spirit.

The Ghost of Christmas Past is a guy who asks Rick about the sins of his youth, or at least the last two seasons. He wants to know how many men Rick has killed (the answer is 4). Also, in a clear parallel to showing Ebeneezer Scrooge how he “lost” his fiance, the ghost also asks Rick how he lost his wife. Rick is suspicious that the guy knows so much about him. After the call, Herschel hobbles in and Rick tells him about the phone calls. I don’t think Herschel really believes that Rick is receiving calls, but he plays along anyway.

As for the rest of the gang, Glenn and Maggie decide to go out shopping for supplies and Daryl, Oscar and Carl take a walk through the prison. Daryl continues to be awesome, telling Carl a story about how his mother got drunk and fell asleep while smoking a cigarette, which then lit her on fire and burned her to death. Happy stuff, but at least he’s trying. Carl shares his own uplifting story about killing his mother and I’ll be damned if he doesn’t deliver his lines about such heavy subject matter in a non-grating/annoying way. Way to go Carl! They guys kill a walker who just so happens to be wearing Carol’s knife in his neck. It’s a sad reminder for Daryl.

Back in Woodbury, the romantic comedy continues. Andrea tells the Gov that she wants to start pulling her weight in her new hometown and he gives her a chance to learn to shoot a bow up on the wall. Andrea and her bowhunting instructor, we’ll call her Katniss, swap stories about killing their own family members, until a walker shows up outside the wall. Katniss misses three shots and Andrea says “screw it,” jumps over the wall and takes out the walker with a knife. This may be the happiest Andrea has been since entering Woodbury.

Andrea visits the Gov’s office, where he tells her that she can’t be on wall duty because jumping over is a breach of the rules. Andrea admits that she’s a woman of action and she secretly liked last week’s Walxing match, though she wasn’t glad that she liked it. The Gov tells her that he knew she liked the fights. He also informs her that she likes him, because he’s super-confident and clearly knows where this storyline is going. I’m happy to at least hear about some inner conflict with Andrea, though it doesn’t slow her initiation into the cult of Woodbury.

Glenn and Maggie arrive at the strip mall. They kiss, they look happy, they joke about an unseen duck toy. Little do they know, Michonne is watching them. Worlds colliding people! The trio becomes a quartet when Merle arrives on the scene. He pretends to be friendly and excited to see Glenn, who tells him that Daryl is still alive. Of course, the good feelings last only so long before Merle takes Maggie hostage and forces Glenn to drive the three of them back to Woodbury. Michonne remains hidden.

Another nice master shot where we can see Glenn, Maggie and Michonne. I guess I’m just a sucker for extreme high angles.

Andrea and the Gov share a drink and clumsily veiled talk about the last time they had sex. I guess that means they’ll have sex soon. They kiss. Later, they have sex. The afterglow is interrupted by Merle, who has returned with the new captives. He explains the deaths of his three companions and tells the Gov that Michonne is dead. The Gov is upset that Merle didn’t bring back her sword and also her head, as the helicopter pilot is getting lonely in the penthouse aquarium. Merle makes an excuse and the Gov goes back in to Andrea. “Everything okay?” she asks him. “Hell yeah,” he says, presenting us with the most awkward line/delivery of the episode (season?). These lovebirds are too much.

“Maybe I’m taking things a little fast, but you like kids, right?”

Back in prison, Rick receives a call from the Ghost of Christmas Present, a woman who tells him that it would be good for him to talk about his wife’s death. He needs to accept that she’s gone and open up to those around him now. Also, it might be a stretch, but in keeping with the Dickens parallel, the next two scenes we see are scenes of happiness with Glenn and Maggie arriving at the store and Andrea and the Gov sharing a drink. Of course, the Cratchit family celebration probably didn’t lead to kidnapping or sex, or at least not kidnapping. The Ghost of Christmas Present also uses Rick’s name before hanging up on him, raising his suspicions even more.

Distraught Daryl sits in the hallway stabbing Carol’s knife into the floor and the wall. I’m not entirely sold on the relationship that Daryl and Carol had. It helps to think of them as friends and confidantes, rather than a traditional romantic couple. Perhaps they loved each other in a platonic way. While Carol has still been a frustrating character, I think considering their relationship in this light adds weight to their past interactions. Did I mention how much I liked last week’s Cherokee Rose scene? That’s kind of undercut by the fact that Carol is alive. Of course, I was pretty sure she had to be alive, despite the show throwing us a curve by filling in her grave. Daryl finds her in a closet and carries her to safety. This truly is a Christmas Carol!

So this is where the writers have been keeping you. How unnecessary.

The Ghost of Christmas Yet to Come calls Rick, and she’s much more vocal than Dickens’ version. It turns out she’s none other than Lori, and she informs Rick that the first three ghosts were Amy, Jim and Jacqui (from way back in season 1). Rick finally has a chance to tell his wife how much he loved/loves her. The call breaks up as Lori tells him something to do with their kids, “take care of them,” perhaps (or something more sinister?). Rick is transformed by his experience. He decides to change his sullen, serious, distant ways and embrace the group, the family that he still has. He returns and picks up his baby daughter, holding her close.

Carl, Beth, Herschel, Rick, and baby all walk out into the courtyard. Who should they see at gate, but Christmas carolers, in the form of a group of moaning walkers and an entrail-soaked Michonne hoping to share in the merriment, and perhaps a bit of the Christmas goose! To conclude the episode, who could say it better than Herschel:

Next week on The Walking Dead: The group invites the Woodbury gang to help them tackle A Tale of Two Cities.