On January 20th, FX’s Justified began its sixth and final season. Based on several Elmore Leonard works, Justified follows Raylan Givens (Timothy Olyphant), a US Marshal who is “exiled” to his hometown of Harlan, Kentucky. Raylan frequently finds himself in conflict with erstwhile mining buddy, now criminal mastermind, Boyd Crowder (Walton Goggins), as the two attempt to coexist in a world that seems a little too small for both of them.Justified highlights the local culture and explores numerous themes, such as family, religion, history and the thin line that divides the good guys from the bad.

Join Patches (of Nothing But the Rain) and me in the coming months as we honor this criminally underrated drama with a series of “RayActions” to each of Justified’s Season 6 episodes. These posts will not be particularly formal, but will give us the chance to make some observations and reflect on each episode, likely culminating in a full Season 6 Dead Season Discussion after the finale.

This week’s RayAction is focused on Justified Season 6, Episode 8 – “Dark as a Dungeon.” It contains SPOILERS for the entire series of Justified. Fire in the Hole!

Patches
“Dark as a Dungeon” was another busy, and fantastic, episode of Justified. Ty Walker tried to escape Kentucky by making a deal with Boyd. Meanwhile, Raylan partnered with Avery Markham, ostensibly to eliminate Walker, but really to put the cheese on the trap for Boyd. Also, no one wanted to play tennis with Mikey.

In our RayAction for “The Trash and the Snake,” I mentioned that I thought Avery was the most dangerous non-Boyd villain in the show’s history. He’s smart, vicious, and possesses a deep understanding of Harlan and its residents, something that’s previously tripped up every Carpetbagger who tried to stir up trouble in the Appalachians. After this episode, I tried to figure out where it all went wrong for Avery. 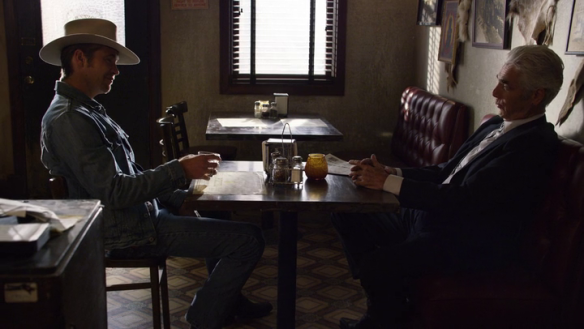 Raylan would suggest it’s because his henchmen weren’t good criminals, but the truth isthat Markham’s henchmen were the most competent in the show’s history. Mags had Coover’s stupidity and Dickie’s grudges holding her back. All of the Detroit Mafia’s goons turned on each other. The Crowes had Dewey and Danny the psychopath to contend with. Boyd’s henchmen alternate between “traitor,” “idiot,” and “addict.”

Choo-Choo may not be fit to tangle with Garry Kasparov, but he and Seabass formed an effective team. Lest we forget, they did successfully kidnapped Boyd Crowder in “Noblesse Oblige.” Walker was a bit too devoted to his comrades, but his resourcefulness kept him one step ahead of the law and he was only caught because he was smart enough to know that he needed Boyd’s help to get out of Harlan.

Avery’s dotted his I’s, crossed his T’s, and avoided these sort of cliches. Why is he currently besieged on all sides? The show would answer this question with “Because he’s a criminal.” Justified has always sort of held that if criminals were that smart, they wouldn’t be criminals. Absent some other smoking/desk/Chekhov’s gun, I’ll settle for that answer.

The other noteworthy event in “Dark as a Dungeon” was its deep exploration of “The Past,” which stands to be one of the longest-running themes on the show, right after “Family” and “You’ll Never Leave Harlan Alive.” The show began and ended with Raylan deciding whether or not he wanted to have his family’s tombstones moved, in anticipation of selling his house and moving out of Harlan. It’s expertly handled, but the image of Raylan talking to Arlo’s ghost seemed a little below a show of Justified’s caliber, even if it gave us the chance to say goodbye to Raymond Barry. Furthermore, the exploration of this theme led to some of the more forced dialogue of the series. For example:

Raylan: Let’s just say you’re putting down roots, I’m pulling up. Sick of the past.
Markham: True. Past is a shadow. Always there behind you.
Raylan: In Harlan, shit, it ain’t behind you. It’s vertical. Dig down another layer, turn up some horror.

Ava: You know what I mean… Wishing you were better’n where you come from. Just admit something you could’ve just as easily been an outlaw as a lawman.
Raylan: Well, obviously, Ava. But the past is a statement. The future is a question.
Ava: The past and the future are a fight to the death. 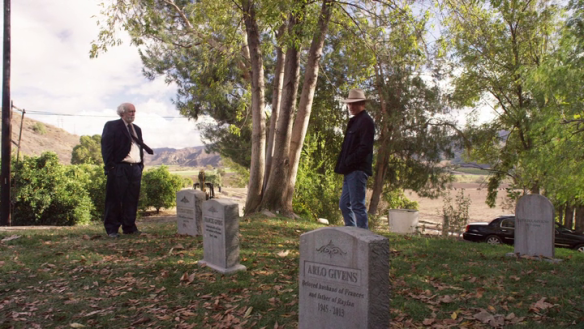 Now I’m not saying the writing was too “on the nose” (Note: I’m totally saying that), but it seemed excessive on a show like Justified, which has never spelled it out for the viewer like this before. What did you think of “Dark as a Dungeon,” Jeff? Did you like the show’s exploration of “The Past” or was it a bit too heavy-handed for your taste as well?

Jeff
This episode continued the hot streak that Justified has been on lately. The plot is clicking along nicely and we’re whittling things down as we get ready for the final stretch. With Walker out of the picture now, and with Raylan’s deal with Markham, everything can start pointing to Boyd. Sure, Markham’s not going to take much else sitting down if he can help it, and there’s still Hale and Duffy to muck things up, but we’re ready to start closing in this web of a story.

Earlier this season, I think we both worried about just how overly complicated the plot might get.

While it wasn’t always easy to see where things were going and figure out what certain individuals were planning, I think we’re past the rough patches. The best thing about this episode is that we’re narrowing the scope while simultaneously focusing on our core characters, something you and I were both hoping would be the main thrust of this final season.

That brings up your question about this episode making such a big deal of the past. I’ll agree with you that seeing the ghost of Arlo was just a tiny bit much for me, as much as I like Raymond J. Barry. Also, the burning of Arlo’s chest was some pretty cold business, considering everything that was in there. Maybe that’s just the history nerd in me saying to hold onto that stuff, it’s important!

Even if they call it out quite a bit in this episode, I think past might be less important than Raylan’s definitive decision to break from it. Burning the chest is a big deal, and it’s pretty final. We know that there was no love lost between father and son, and Raylan is ready to take the final steps and free himself from Arlo, and eventually Harlan, for good. Even if we never knew about it before (did we?) I loved Raylan going out to Arlo’s shack in the woods and finding it empty. The idea of the shack, the mystery of what was inside and just what Arlo does there are bigger and scarier than the realities. It’s empty.

Does that mean Arlo was empty? Maybe from a certain point. He locked his old life away in a trunk that Raylan burned and whatever was left was just the mystery of the shack and a whole lot of awfulness, abuse, violence and crime. Raylan doesn’t want to lock everything away. He doesn’t want to need an escape from life, family and responsibility. He needs to escape from his life in Harlan instead. Sure, he was out before, but there was always some part of him held back in Harlan. Over the past 6 seasons, Raylan has exorcised his demons (and also kicked a lot of ass and said a lot of awesome things). All that remains now is Boyd. 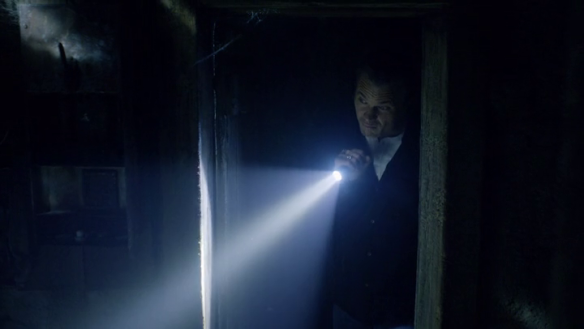 Does Boyd mean death for Raylan? Did Raylan remove his gravestone prematurely? I suppose it’s possible. I don’t know if Raylan would want to live in a world where Boyd got away. Of course, another question is can either Raylan or Boyd exist without the other? Each man seems to have some sort of plan–whether vague or concrete–about what do once their business is taken care of. I honestly think that Raylan could carry on in a post-Harlan life with Winona and Willa, but I’m not so sure you can take Boyd out of Harlan. Not alive anyway.

LINE OF THE NIGHT

Patches: Raylan and Tim will never give this spot up… 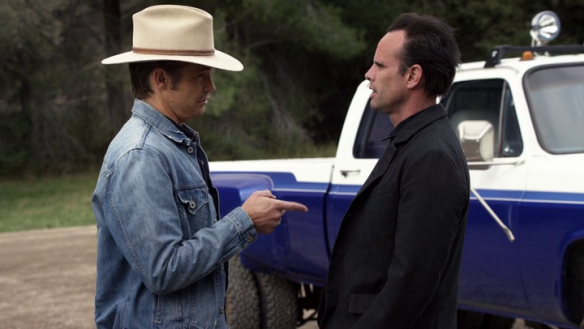 Raylan: This is one of them classic stories where the hero gets his man then he rides off into the sunset.
Boyd: Or Maybe it’s like that other classic, where a guy chases a whale to the ends of the earth only to drown for his troubles.
Raylan: I gotta admit, there’s a small part of me that’s gonna miss this when it’s over.

BIGGEST QUESTION
Patches: What were Walker’s last words going to be? Why did he do it? Sometimes,Justified, you are an obnoxiously good show.
Jeff: Okay, we’ve seen the bait, but when’s the switch? Is that money seriously going to remain in that vault?

RAPID FIRE
Patches: First it was Avery. Then Katherine. Who will Art have a menacingly jovial conversation with next week?
Jeff: I’m not sure if or how often it’s happened, but let’s get Art in a room with Wynn Duffy. Guac bib strongly recommended.

Jeff: Tim’s right, nobody in Harlan is named Steve or Justin. What’s your favorite Justified moniker?
Patches: There’s so many great ones! I’m not sure I can choose between “Hot Rod” Dunham, “The Wildman,” or Mike “The Hammer” Reardon. Also, Choo-Choo. Never forget… If I have to pick an actual name, it’s gotta be Jackie Nevada for purely name-related reasons.

Patches: If Walker did join Markham for the money, why did he do it? And more importantly, what would have been the worst reason possible?
Jeff: Maybe Chris Hedges knows. The worst reason for hooking up with Markham? Being the world’s biggest Prancer fan.

Jeff: Am I too used to seeing her in her prison getup, or did they slash the fabric budget for Ava’s shirts this season?
Patches: Hmmm… Can’t say I’ve noticed. I’ve been too busy looking at Ava’s boobs all season. 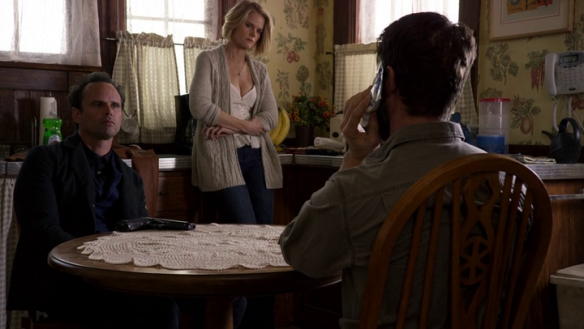 Patches: Raylan likes cowboy movies and Boyd knows Moby Dick. Any other “old stories” you wish the two would have threatened each other with?
Jeff: Going Biblical might be over the top, and there’s enough Steinbeck in here already. I think I’ll appeal to the immortal bard, and I know the internet won’t let me down!

Jeff: What are you hiding in your secret shack in the woods?
Patches: PROGRESSIVELY SMALLER SECRET SHACKS!